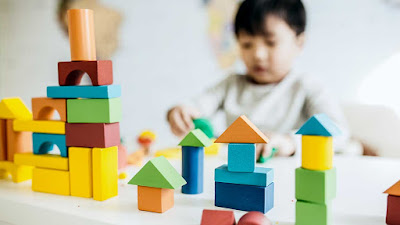 Children with autism spectrum disorder (ASD) frequently have co-occurring (comorbid) psychiatric symptoms, with rates significantly higher than would be expected from the general population. Research indicates that the most common co-occurring diagnoses are anxiety and depression, attention problems, and disruptive behavior disorders. Previous studies also suggest that restricted, repetitive patterns of behavior, interests, or activities (RRBs) are associated with the symptoms of co-occurring psychiatric conditions in individuals with autism.

The criteria for the DSM-5 diagnostic category of Autism Spectrum Disorder (ASD) include RRBs as a core diagnostic feature, together with the domain of social communication and social interaction deficits. According to the DSM-5, restricted, repetitive patterns of behavior, interests, or activities are defined by the presence of at least two of the following:
RRBs have been shown to cause significant challenges for both the individual with autism and their family. Likewise, they can impede learning and socialization by decreasing the likelihood of positive interactions with peers and adults. Parents of autistic individuals also report that RRBs are one of the most challenging features of autism due to their significant interference with daily life. In contrast with the core domain of social/communication deficits, RRBs have only recently been the focus of systematic research efforts. 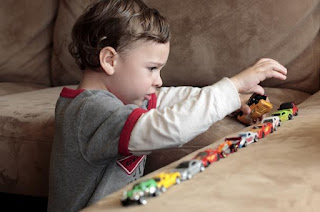 Research
Stratis and Lecavalier (2013) investigated the relationship between RRBs and co-occurring depressive, anxiety, attention-deficit hyperactivity disorder (ADHD) and oppositional defiant disorder (ODD) symptoms, while considering level of functioning. Participants in the study were 72 parents of children and youth diagnosed with ASD (ages 5–17). Children’s co-occurring diagnoses included: Attention-Deficit/Hyperactivity Disorder (ADHD), Anxiety Disorders, Mood Disorders, Behavioral Disorders, and Intellectual Disability. Frequency and severity of RRBs were assessed across five domains: Stereotypic Behavior, Self-Injurious Behavior (SIB), Compulsive Behavior, Ritualistic/Sameness Behavior, and Restricted Interests. Ratings by parents were used to quantify co-occurring symptom severity for each of the following four domains: ADHD, ODD, anxiety disorders and depressive disorders. Data analyses were completed to determine which RRBs were most predictive of co-occurring symptom severity.
Results
Autistic children with high levels of ritualistic and sameness behavior tended to show more severe symptoms of anxiety and depression. This appears consistent with the high co-occurrence of depressive and anxiety symptoms in the general population. This finding also suggests that ritualistic and sameness behaviors may be implicated in the development and maintenance of anxiety in individuals with autism. Interestingly, high levels of restricted interests were associated with less severe symptoms of depression, suggesting that restricted interests may be a protective factor against the development of depression. Although restricted interests frequently have a negative impact on interpersonal relationships, they might also have a positive effect by providing a feeling of self-validation and a means of occupying one’s time, while also serving as an incentive to increase knowledge.
Inconsistent with previous research, all psychiatric symptom domains appeared unrelated to children’s level of functioning. However, level of functioning moderated the relationship of SIB and depressive and anxiety symptoms. For higher functioning children and youth, elevated levels of SIB were predictive of more severe depressive and anxiety symptoms whereas higher levels of SIB were predictive of less severe depressive and anxiety symptoms for lower functioning individuals. For lower functioning individuals, high levels of ritualistic and sameness behaviors predicted more severe depressive symptoms while there was no significant relationship for higher functioning individuals.
Implications
The results of this study may help clarify the presentation of ASD phenotypes, suggesting that different types of RRBs may be predictive of co-occurring psychiatric disorders. This has implications for genetic and neurobiological research. For example, differences underlying genetic and neurobiological factors may be identified based on symptom presentation, including RRBs and co-occurring psychiatric symptoms. Moreover, if RRBs and psychiatric symptoms do share common etiologies, interventions for psychiatric symptoms may help ameliorate RRBs in autistic individuals. The possibility that RRBs such ritualistic and sameness behaviors may be involved in development and maintenance of anxiety or that restricted interests protect against the development of depressive symptoms has significant implications for treatment and should be explored in future research. Given that RRBs continue to be a core feature of ASD in DSM-5, clinicians and autism professionals should give increased attention to the assessment and presence of RRBs and their impact on common co-occurring disorders and psychological well-being of individuals with autism.
Stratis, E. A., & Lecavalier, L. (2013).  Restricted and repetitive behaviors and psychiatric symptoms in youth with autism spectrum disorders. Research in Autism Spectrum Disorders, 7, 757–766.
Lee A. Wilkinson, PhD, is a licensed and nationally certified school psychologist, and certified cognitive-behavioral therapist. He is author of the award-winning books,  A Best Practice Guide to Assessment and Intervention for Autism and Asperger Syndrome in Schools and Overcoming Anxiety and Depression on the Autism Spectrum: A Self-Help Guide Using CBT. He is also editor of a text in the APA School Psychology Book Series, Autism Spectrum Disorder in Children and Adolescents: Evidence-Based Assessment and Intervention in Schools. His latest book is A Best Practice Guide to Assessment and Intervention for Autism Spectrum Disorder in Schools (2nd Edition).
Posted by Lee A. Wilkinson bestpracticeautism.com at Friday, January 20, 2017