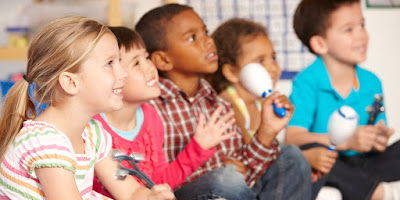 Music therapy has become an integral part of many programs for children with autism. The broad category of music therapy is generally described as interventions that seek to teach individual skills or goals through music. Music therapists use their training as musicians, clinicians, and researchers to effect changes in cognitive, physical, communication, social, and emotional skills.  According to the National Autistic Society, “Music therapy aims to encourage increased self-awareness/self-other awareness, leading to more overt social interactions. The therapy stimulates and develops the communicative use of voice and pre-verbal dialogue with another, establishing meaning and relationship to underpin language development. The client may also benefit from increased tolerance of sound, tolerance of and capacity for two-way communication.”
Research Autism reports strong positive evidence from peer-reviewed journals that support the effectiveness of music therapy for individuals with autism. Based on the literature to date, music therapy has shown good effects in influencing joint attention, social interaction, verbal and gestural communication and behavior. It is considered to be a useful intervention, particularly with young children, and where language acquisition is either delayed or disordered to a severe degree. Currently, music therapy is identified as an emerging intervention by the National Autism Center (2015) and incorporates many of the identified autism-specific evidence-based practices. Supporters of music therapy emphasize that it can be used to develop social engagement, joint attention, communication abilities, while also addressing emotional needs and quality of life.
A study published in the journal Autism provides further support for the effectiveness of music therapy with autistic children. This randomized controlled exploratory study employed a single subject comparison design in two different conditions (improvisational music therapy versus toy play sessions) and two different parts of a session (an undirected/child-led part versus a more directed/therapist-led part) in each condition.

Improvisational music therapy is an individualized intervention that facilitates moment-by-moment motivational and interpersonal responses in children with autism. Compared with other therapeutic interventions utilizing music as a background or contingent stimulus, improvisational music therapy involves the interactive use of live music for engaging clients to meet their therapeutic needs. It is gaining growing recognition as an effective intervention addressing fundamental levels of spontaneous self-expression, emotional communication and social engagement for individuals with a wide range of developmental disorders.
Results and Discussion
Improvisational music therapy produced markedly more and longer events of joy, emotional synchronicity and initiation of engagement behaviors in the children than toy play sessions. In response to the therapist’s interpersonal demands, ‘compliant (positive) responses’ were observed more in music therapy than in toy play sessions, and ‘no responses’ were twice as frequent in toy play sessions as in music therapy. In the music therapy condition, there were more joy, emotional synchronicity and initiation of engagement events in the undirected part than the directed part, suggesting that children were happier, more able to express their happy emotions and more able to share their affects with the therapist when leading. These results suggest that musical attunement enhances musical-emotional communication together with joy and emotional synchronicity, which results in children’s spontaneous willingness to respond, initiate and engage further.
According to the authors, “The temporal structure of music and the specific use of musical attunement in improvisational music therapy suggests that we can help children with autism experience and develop affective skills in a social context.”  Creating music relates to the child’s expression, interest and focus of attention may evoke responses from the child to a therapist creating such relational music for them. Moreover, improvising music together is an emotionally engaging process. Music can be an attractive medium, allowing the child his/her own space and the choice of objects, at the same time engaging the child with different objects of the therapist’s choice.
Of course, this “exploratory” study has limitations.  For example, the small sample makes any generalizable conclusion premature. The test power is low and should be considered when interpreting the results. Likewise, the small sample limits the relevance of subgroup analyses (language, age, severity) as well as therapists’ effects which would be helpful to understanding how children with different developmental needs respond to this type of intervention different therapists.
Conclusion
The results of this exploratory study found significant evidence supporting the value of music therapy in promoting social, emotional and motivational development in autistic children. The findings highlight the importance of social-motivational aspects of musical interaction between the child and the therapist, the therapeutic potential of such aspects in improvisational music therapy, and the relative value of less directed and more child centered approaches for children with autism. The authors conclude, “Both previous and the current study indicate that we should use music within the child’s focus of attention, behavioral cue and interests, whether it is improvised or precomposed. A future study should perhaps look at the differential effect on response of improvised and precomposed music with young children with autism.”
Lee A. Wilkinson, PhD, is author of the award-winning books, A Best Practice Guide to Assessment and Intervention for Autism and Asperger Syndrome in Schools and Overcoming Anxiety and Depression on the Autism Spectrum: A Self-Help Guide Using CBT. He is also editor of a text in the APA School Psychology Book Series, Autism Spectrum Disorder in Children and Adolescents: Evidence-Based Assessment and Intervention in Schools. His latest book is A Best Practice Guide to Assessment and Intervention for Autism Spectrum Disorder in Schools (2nd Edition)
Posted by Lee A. Wilkinson bestpracticeautism.com at Monday, January 04, 2021