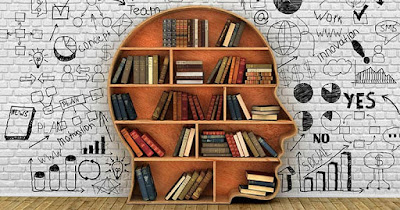 What are savant skills?
There is a long history of reports of individuals who despite having severe intellectual impairments, demonstrate remarkable skills in a particular area. The term “savant” has been variously defined as those individuals who show (a) normatively superior performance in an area and (b) a discrepancy between their performance in that area and their general level of functioning. Some researchers have differentiated “prodigious” savants (e.g., individuals possessing an exceptional ability in relation to both their overall level of functioning and the general population) from “talented” savants (e.g., individuals showing an outstanding skill in comparison with their overall level of functioning). 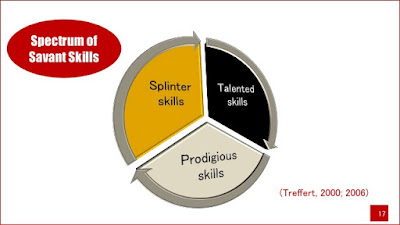 Savant skills have been reported much more frequently in males than in females and have been identified in a wide range of neurological and neurodevelopmental disorders. The most commonly reported savant skills are mathematical skills (calendrical calculations, rapid arithmetic and prime number calculations), music (especially the ability to replay complex sequences after only one exposure), art (complex scenes with accurate perspective either created or replicated following a single brief viewing) and memory for dates, places, routes or facts. Less frequently reported are “pseudo-verbal” skills (hyperlexia or facility with foreign languages), coordination skills and mechanical aptitude.

Research
Research in the past 10 years has generated some controversy about the actual incidence of savant syndrome in autism. Once thought to be rare in people with autism, found in no more than 1 out of 10 individuals, research over the past few years suggests savant skills may be more common than previous estimates. Although there have been many single case or small group studies of autistic individuals who possess savant abilities or exceptional cognitive skills, there have been few systematic, large-scale investigations in this area. Inconsistencies in definition and wide variation in diagnostic criteria, ages and ability levels of the cases reported are problematic, as is a paucity of valid information on rates of savant skills in autism. The objective of this research study was to investigate the nature and frequency of savant skills in a large sample of individuals with autism who had been initially diagnosed as children.
The total sample was comprised 137 individuals, first diagnosed with autism as children, who were subsequently involved in an ongoing, longitudinal follow-up study. Cognitive assessments (Wechsler Scales) were completed for all participants (100 males and 37 females) between the ages of 11 and 48 years (mean age of 24). Parental report data on savant skills were obtained approximately 10 years later at a subsequent follow-up.  Cognitive ability ranged from severe intellectual impairment to superior functioning. Savant skills were judged from parental reports and specified as “an outstanding skill/knowledge clearly above participant’s general level of ability and above the population norm.”
Results
Of the 93 individuals for whom parental questionnaire and cognitive data were available, 16 (17.2%) met criteria for a parent-rated skill, 15 (16.8%) had an exceptional cognitive skill and 8 (8.6%) met criteria for both. There were 14 calendrical calculators (one also showed exceptional memory and another also showed skill in computation and music). There were four others with computational skills (in one case combined with memory and in another case with music). Visuospatial skills (e.g., directions or highly accurate drawing) were reported in three individuals. One individual had a musical talent, one an exceptional memory skill and one had skills in both memory and art. The subtest on which participants were most likely to meet the specified criteria for an area of unusual cognitive skill was block design followed by digit span, object assembly and arithmetic.
There was a sex difference (albeit statistically non-significant) in the prevalence of savant skills. Almost one-third (32%) of males showed some form of savant or special cognitive skill compared with 19 percent of females. No individual with a non-verbal IQ below 50 met criteria for a savant skill and contrary to some earlier hypotheses; there was no indication that individuals with higher rates of stereotyped behaviors/interests were more likely to demonstrate savant skills.
Discussion
In total, 39 participants (28.5%) met criteria for a savant skill. Cognitively, 23 individuals (17% of total sample) met criteria for one or more exceptional area of skill on the Wechsler Scales. Combining the two, 37 per cent of the sample showed either savant skills or unusual cognitive skills or both, a far higher proportion than previously reported. These results suggest that the rates of savant skills in autism are significant, particularly among males, and although these estimates are higher than reported by other researchers, the findings parallel those of previous studies. Based on these findings, it appears likely that at least a third of individuals with autism show unusual skills or talents that are both above population norms and above their own overall level of cognitive functioning. It should be noted that these data offer no support to claims that savant skills occur most frequently in autistic individuals who are intellectually challenged or that individuals with higher rates of stereotyped behaviors/interests are more likely to demonstrate savant skills.
Implications

Apart from the need for further research examining the underlying basis of savant skills and why certain individuals go on to develop any area of exceptional skill and why these skills encompass such different areas, there is a more practical and pressing question; “how can these innate talents be developed to form the basis of truly ‘functional’ skills?” In the present study, only five autistic individuals with exceptional abilities (four related to math and one related to visuospatial ability) had succeeded in using these skills to find permanent employment. For the majority, the isolated skill remained just that, leading neither to employment nor greater social integration. As the authors conclude, “The practical challenge now is to determine how individuals with special skills can be assisted, from childhood onward, to develop their talents in ways that are of direct practical value (in terms of educational and occupational achievements), thereby enhancing their opportunities for social inclusion as adults.”

Treffert, D. (2009). The Savant Syndrome: An Extraordinary Condition. A Synopsis: Past, Present, Future. Philosophical Transactions of the Royal Society B: Biological Sciences, 364, 1351–1358.