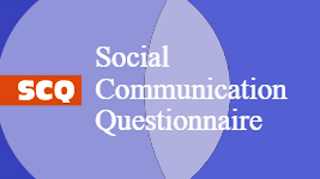 
The Social Communication Questionnaire (SCQ; Rutter, Bailey, & Lord, 2003), previously known as the Autism Screening Questionnaire (ASQ), was initially designed as a companion screening measure for the Autism Diagnostic Interview-Revised (ADI-R; Rutter, Le Couteur & Lord). The SCQ is a parent/caregiver dimensional measure of ASD symptomatology appropriate for children of any chronological age older than fours years. It can be completed by the informant in less than 10 minutes. The primary standardization data were obtained from a sample of 200 individuals who had participated in previous studies of ASD.

The SCQ is available in two forms, Lifetime and Current, each with 40 questions presented in a yes or no format. Scores on the questionnaire provide an index of symptom severity and indicate the likelihood that a child has an ASD. Questions include items in the reciprocal social interaction domain (e.g., “Does she/he have any particular friends or best friend?”), the communication domain (e.g., “Can you have a to and fro ‘conversation’ with him/her that involves taking turns or building on what you have said?”) and the restricted, repetitive, and stereotyped patterns of behavior domain (e.g., Has she/he ever seemed to be more interested in parts of a toy or an object [e.g., spinning the wheels of a car], rather than using the object as intended?”).
Compared to other screening measures, the SCQ has received significant scrutiny and has consistently demonstrated its effectiveness in predicting ASD versus non-ASD status in multiple studies. A meta-analysis examining the previous research on the utility of the SCQ as a screening instrument found it to be an acceptable screening tool for ASD (area under the curve = 0.885) (Chesnut et al., 2017). The scale has been found to have good discriminant validity and utility as an efficient screener for at-risk groups of school-age children. The lifetime version is recommended for screening purposes as it demonstrates the highest sensitivity value. A threshold raw score of >15 is recommended to minimize the risk of false negatives and indicate the need for a comprehensive evaluation. Comparing autism to other diagnoses, this threshold score resulted in a sensitivity value of .96 and a specificity value of .80 in a large population of children with autism and other developmental disorders. The positive predictive value was .93 with this cutoff. The authors recommend using different cut-off scores for different purposes and populations. Several studies (Allen et al., 2007; Eaves et al, 2006) have suggested that a cut-off of 11 may be more clinically useful (Norris & Lecavalier, 2010).
The SCQ is one of the most researched of the ASD-specific evaluation tools and can be recommended for screening and as part of comprehensive developmental assessment for ASD (Chestnut et al., 2017; Norris & Lecavalier, 2010; Wilkinson, 2010, 2016). The SCQ (Lifetime form) is an efficient screening instrument for identifying children with possible ASD for a more in-depth assessment. For clinical purposes, practitioners might consider a multistage assessment beginning with the SCQ, followed by a comprehensive developmental evaluation (Wilkinson, 2011, 2016). However, cut-off scores may need to be adjusted depending on the population in which it is used. The evidence also indicates that although the SCQ is appropriate for a wide age range, it is less effective when used with younger populations (e.g., children two to three years). It was designed for individuals above the age of four years, and seems to perform best with individuals over seven years of age.