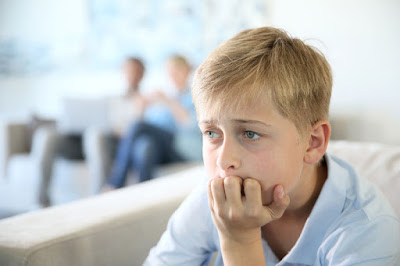 There is robust research to suggest that 70 to 80 percent of children with autism spectrum disorder (ASD) meet diagnostic criteria for one or more co-occurring (comorbid) disorders and 40 to 50 percent meet criteria for two or more. A Comorbid disorder is defined as a condition that co-occurs with another diagnosis so that both share a primary focus of clinical and educational attention. The most prevalent comorbid conditions are anxiety, depression, attention-deficit/hyperactivity disorder (ADHD), disruptive behavior problems, and chronic tic disorders, all which contribute to overall impairment.
Internalizing Problems
Studies have consistently reported an association between ASD and internalizing symptoms, in particular, anxiety and depression. A bidirectional association has been identified between internalizing disorders and autistic symptoms. For example, both a higher prevalence of anxiety disorders has been found in ASD and a higher rate of autistic traits has been reported in youth with mood and anxiety disorders. Although prevalence rates vary from 11% to 84%, most studies indicate that approximately one-half of children with ASD meet criteria for at least one anxiety disorder. Individuals with ASD also display more social anxiety symptoms compared to typical individuals, even if these symptoms were clinically overlapping with the characteristic social problems of ASD. In addition, there is some evidence to suggest that adolescents and young adults with ASD show a higher prevalence of bipolar disorders as compared to controls.
Depression is one of the most common comorbid conditions observed in individuals with ASD, particularly higher functioning youth. A study of psychiatric comorbidity in young adults with ASD revealed that 70% had experienced at least one episode of major depression and 50% reported recurrent major depression. Although another documented association is with obsessive-compulsive disorder (OCD), it is difficult to determine whether observed obsessive-repetitive behaviors are an expression of a separate, comorbid OCD, or an integral part of the core diagnostic features of ASD (i. e., restricted, repetitive patterns of behavior, interests, or activities).
Externalizing Problems
An association between ASD and attention-deficit/hyperactivity disorder (ADHD) and other externalizing problems (i. e., oppositional defiant disorder) have been reported. Studies have found that children with ASD in clinical settings present with co-occurring symptoms of ADHD with rates ranging between 37% and 85%. Although there continues to a debate about ADHD comorbidity in ASD, research, practice and theoretical models suggest that co-occurrence between these conditions is relevant and occurs frequently. For example, case studies suggest that ADHD is a relatively common initial diagnosis in young children with ASD. It is also important to note that a significant change in the DSM-5 is removal of the DSM-IV-TR hierarchical rules prohibiting the concurrent diagnosis of ASD and ADHD. When the criteria are met for both disorders, both diagnoses are given.
Other Comorbidities
Tourette Syndrome (TS) and other tic disorders have been found to be a comorbid condition in many children with ASD. A Swedish study showed that 20% of all school-age children with ASD met the full criteria for TS. There also appears to be a higher incidence of seizures in children with autism compared to the general population. The comorbidity of ASD and psychotic disorders has received some research attention. A study of children with ASD who were referred for psychotic behavior and given a diagnosis of schizophrenia showed that when psychotic behaviors were the presenting symptoms, depression and not schizophrenia, was the likely diagnosis. Thus, individuals with ASD may present with characteristics that could lead to a misdiagnosis of schizophrenia and other psychotic disorders. Other co-occurring conditions include physical (cerebral palsy, atypical gait), and medical (allergies, asthma, gastrointestinal) conditions. Behavior problems associated with GI distress may include sleep disturbances, stereotypic or repetitive behaviors, self-injurious behaviors, aggression, oppositional behavior, irritability or mood disturbances, and tantrums. In addition, unusual responses to sensory stimuli, chronic sleep problems, catatonia, and low muscle tone often occur in individuals with ASD. Specific learning difficulties are also common, as is developmental coordination disorder.

Implications
Many individuals with ASD have symptoms that do not form part of the diagnostic criteria for the disorder (about 70% of individuals with ASD may have one comorbid disorder, and 40% may have two or more comorbid conditions). The most common co-occurring diagnoses are anxiety and depression, attention problems, and challenging behavior disorders. When the criteria for a comorbid disorder is met, both diagnoses should be given. Medical conditions commonly associated with ASD should also be noted.

The core symptoms of ASD can often mask the symptoms of a comorbid condition. The challenge for practitioners is to determine if the symptoms observed in ASD are part of the same dimension (i. e, the autism spectrum) or whether they represent another condition. Although various psychometric instruments, such as clinical interviews, self-report questionnaires and checklists, are widely used to assist in diagnosis, these tools are designed and standardized to identify symptoms in the general population, and may not be appropriate and valid for use with ASD. Likewise, their administration may be problematic in that individuals with ASD may have difficulties in sustaining a reciprocal conversation, reporting events, and perspective taking. Nevertheless, comorbid problems should be assessed whenever significant behavioral issues (e.g., inattention, impulsivity, mood instability, anxiety, sleep disturbance, aggression) become evident or when major changes in behavior are reported. Individuals who are nonverbal or have language deficits, observable symptoms such as changes in sleeping or eating or increases in challenging behavior should be evaluated for anxiety and depression. Co-occurring conditions should also be carefully investigated when severe or worsening symptoms are present that are not responding to intervention or treatment.

Further information on best practice guidelines for assessment and intervention is available from A Best Practice Guide to Assessment and Intervention for Autism Spectrum Disorder in Schools (2nd Edition).
References and Further Reading

Lee A. Wilkinson, PhD, is a licensed and nationally certified school psychologist, chartered psychologist, and certified cognitive-behavioral therapist. He is also a university educator and trainer, and has published widely on the topic of autism spectrum disorders both in the US and internationally. Dr. Wilkinson is author of the award-winning books, A Best Practice Guide to Assessment and Intervention for Autism and Asperger Syndrome in Schools and Overcoming Anxiety and Depression on the Autism Spectrum: A Self-Help Guide Using CBT. He is also editor of a best-selling text in the American Psychological Association (APA) School Psychology Book Series, Autism Spectrum Disorder in Children and Adolescents: Evidence-Based Assessment and Intervention in Schools. His latest book is A Best Practice Guide to Assessment and Intervention for Autism Spectrum Disorder in Schools (2nd Edition).
Posted by Lee A. Wilkinson bestpracticeautism.com at Wednesday, April 10, 2019 0 comments Links to this post